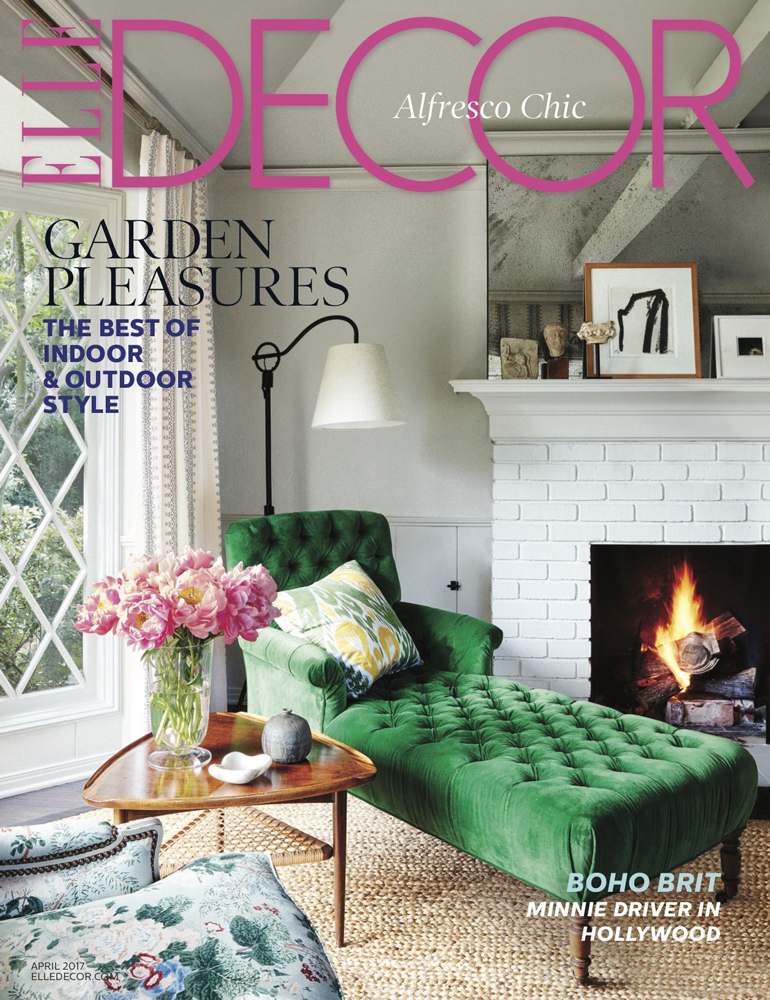 She may be a longtime Los Angeles resident, but actress Minnie Driver can’t help bringing English wit and charm—and just a touch of eccentricity—to her new home in the Hollywood Hills.

A couple of years ago, Minnie Driver sold what she calls the “big old Spanish-style house in the hills,” where she’d lived for 18 years, and bought a 1940s ranch house, also in the Hollywood Hills, with less square footage but a larger garden and a pool. She would soon begin filming the ABC comedy series Speechless, in which she plays a feisty mom of three, including a teenage boy with cerebral palsy. (The show debuted to raves and has been renewed.) 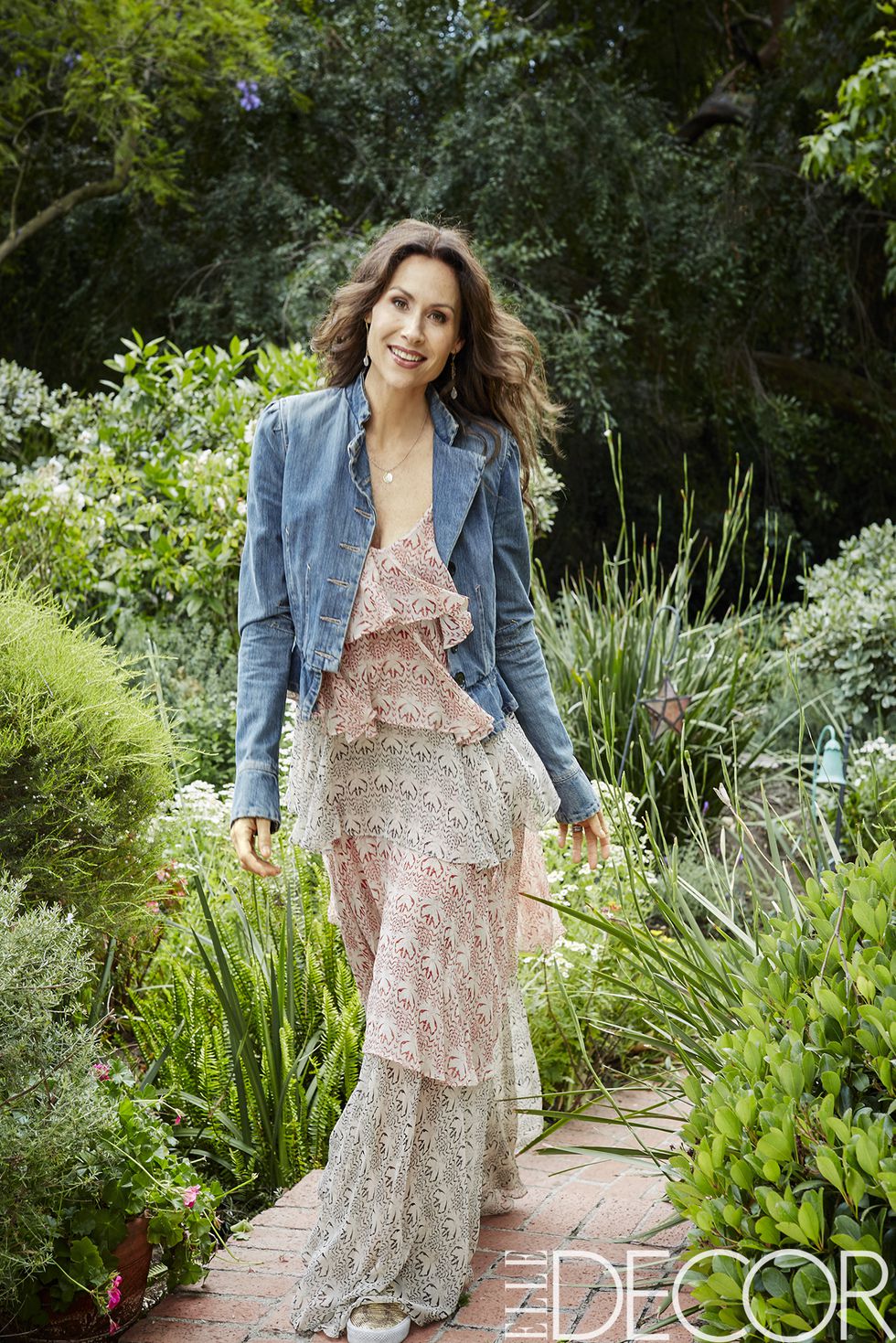 Minnie Driver in the garden of her home in Los Angeles, a 1940s ranch housedecorated by Peter Dunham.

Driver knew she wanted to enlist a designer to help with her new home. “I simply didn’t have the time to do it myself,” she says. “But I had a clear idea of what I wanted.” Her mother, English interior designer Gaynor Churchward, suggested she look through decorating books and magazines in search of ideas.

“It turned out that every drawing room or bedroom or chair that I loved was by Peter Dunham,” says Driver. “I thought, there’s no way he’s going to be American — he must be European.” Her hunch was correct: Dunham, like Driver, was born in England and moved to Los Angeles in the 1990s.

The actress and the designer share an eclectic aesthetic, Dunham says, because “we’re English gypsies.” Driver was raised by well-traveled parents and spent much of her childhood in Barbados; her mother, who recently turned 80, is now a consultant for a Turkish textile firm. Dunham was brought up in Spain and France and returned to England for boarding school, where many of his friends had parents and grandparents who had been colonial officials during the last days of the Raj. 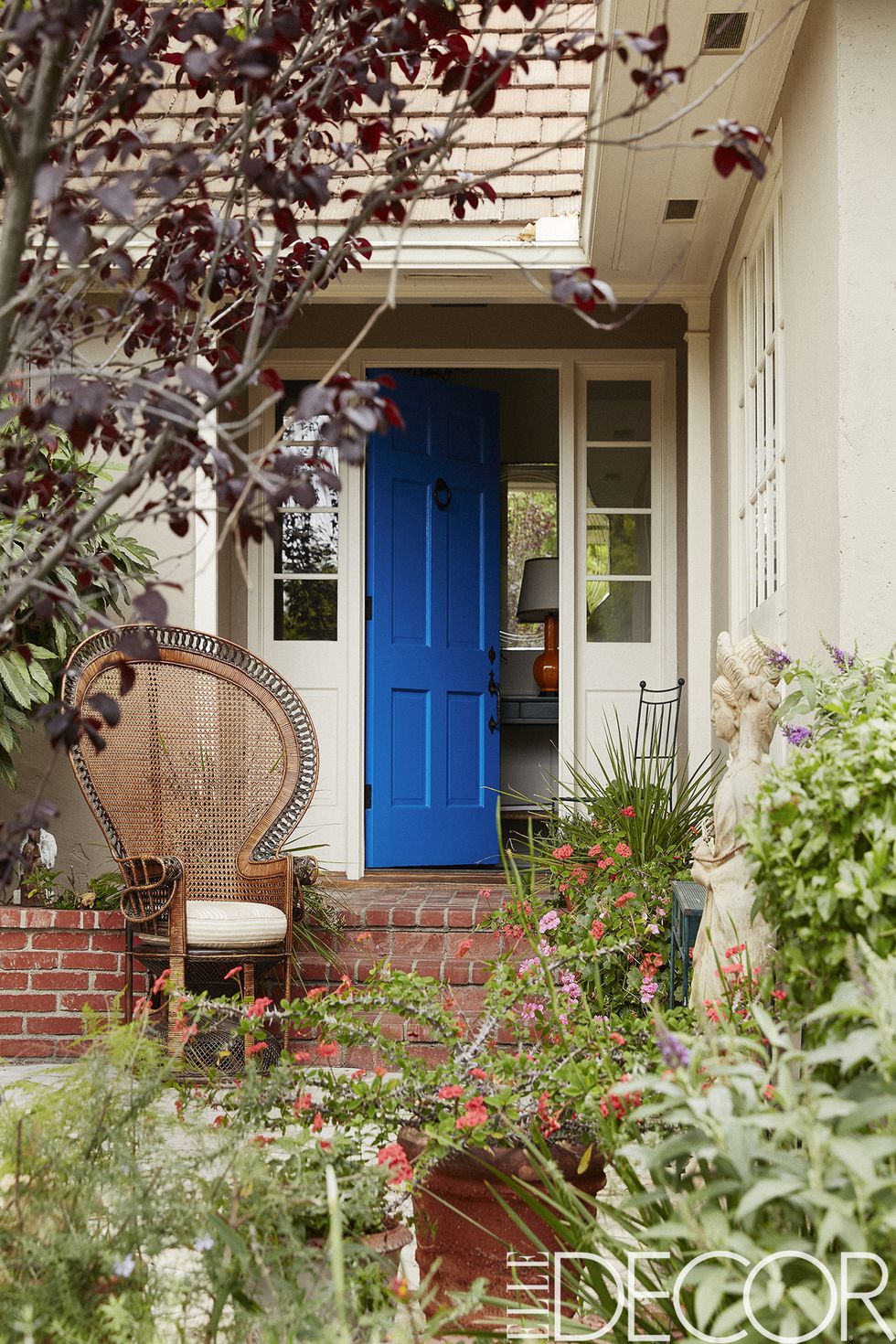 A 1960s armchair at the front entrance.

“The English have always had a fascination with other cultures, whether Mediterranean, Far Eastern or African,” Dunham explains. “We brought all these different influences back with us when we returned from the colonies.” Those influences have informed Dunham’s line of spirited and colorful fabrics, which are adorned with paisleys, Indian florals and tribal motifs. And yet Driver was initially drawn to this house for its quintessentially English feel. 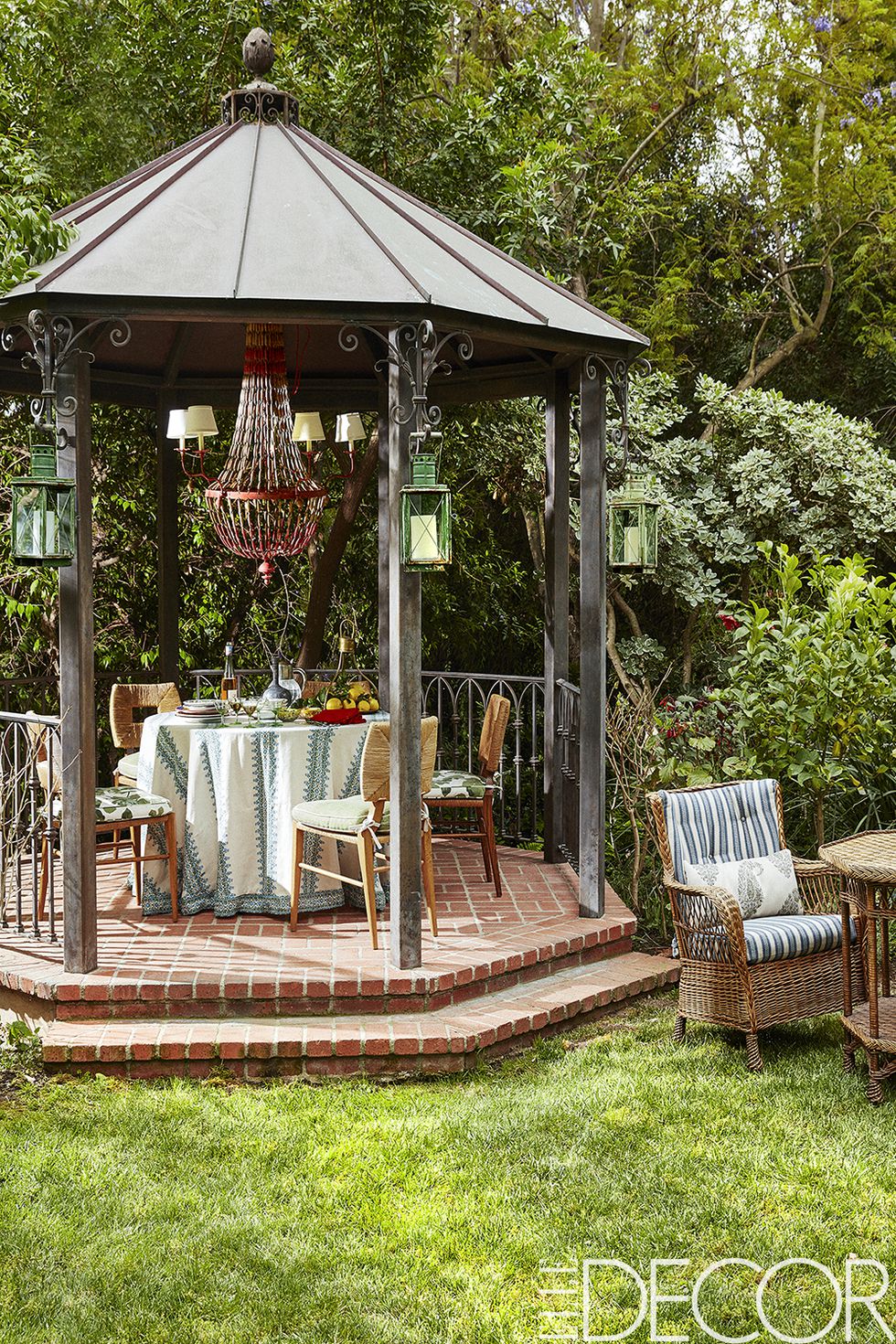 The gazebo’s dining chairs, vintage French chandelier and lanterns are fromHollywood at Home; the tablecloth and the chair cushions are of fabrics fromPeter Dunham Textiles.

“Everyone who walks in here says that they expect to find the queen in the loo,” she says. The garden has herbaceous borders, a maypole and a gazebo, “which is so set up for tea, it’s not funny.” It’s also English in that “it’s not scared of being odd,” she says. “You wouldn’t necessarily put a chintz chair with a suzani in a living room and expect it to work, but I grew up in houses like that, and that’s what I’ve done here.” 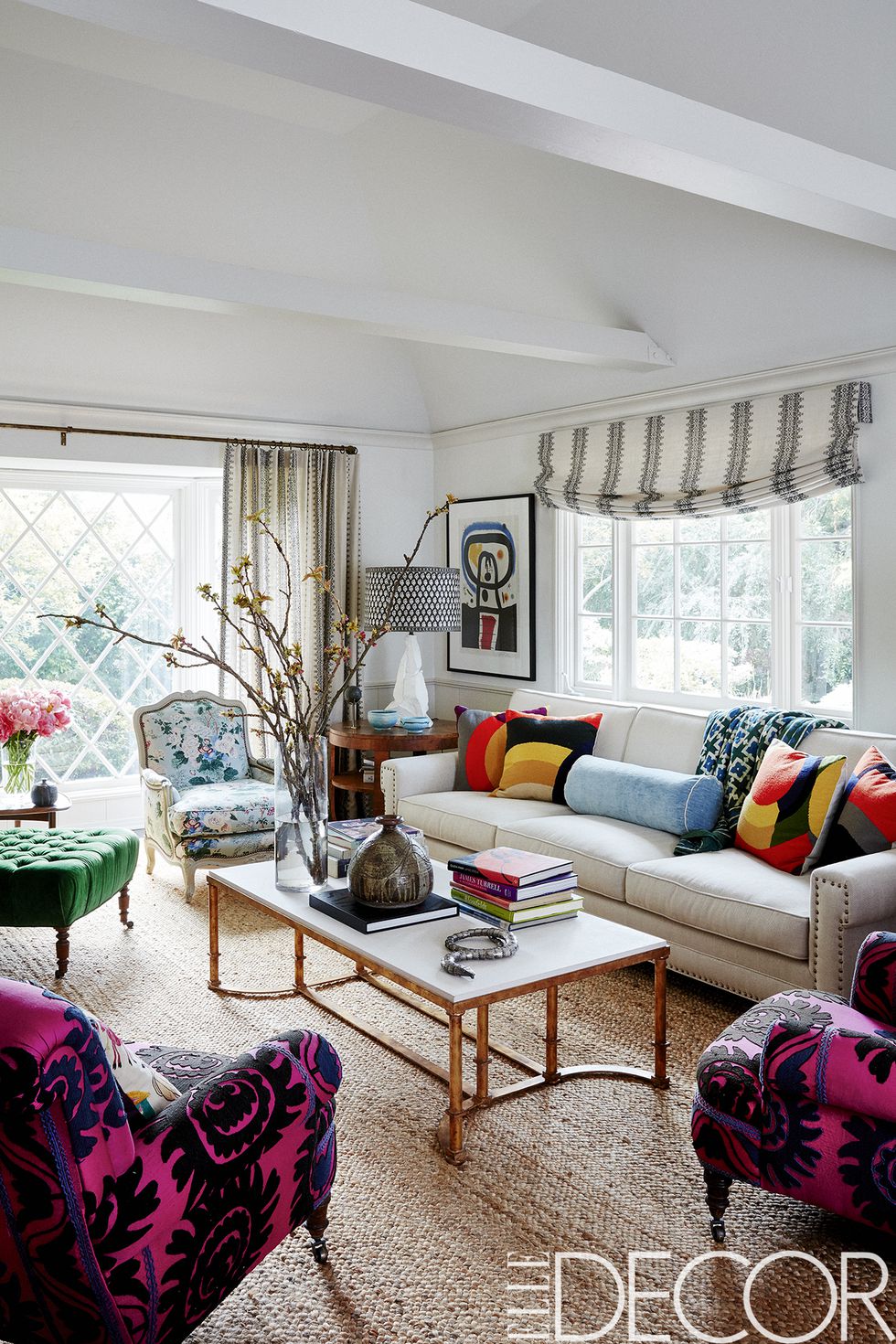 The living room sofa is covered in a Schumacher fabric, the cocktail table, the 1940s Italian walnut side table, the lamp and the jute rug are all fromHollywood at Home. The ’50s French bergère is covered in a Lee Jofa floral and vintage French armchairs are upholstered in a 1960s suzani.

Nowhere is this fearless eccentricity more apparent than in Driver’s bedroom, previously a white box. When Dunham presented her with some vintage textiles, Driver picked out an Indian block print and zeroed in on the border. They blew it up on a laser printer and created a new fabric, which Dunham used more or less everywhere in the room — as wallcovering, as curtains, as Roman shades. “It was a huge leap of faith,” says Driver. “I was terrified that I was going to hate it.” Driver’s boyfriend, curator Neville Wakefield — “who has a wonderful design aesthetic himself, and would much rather the room stay a white box,” she says — told her that it was the moment to try something extreme. “And it’s exquisite. It’s like being inside a kaleidoscope.” 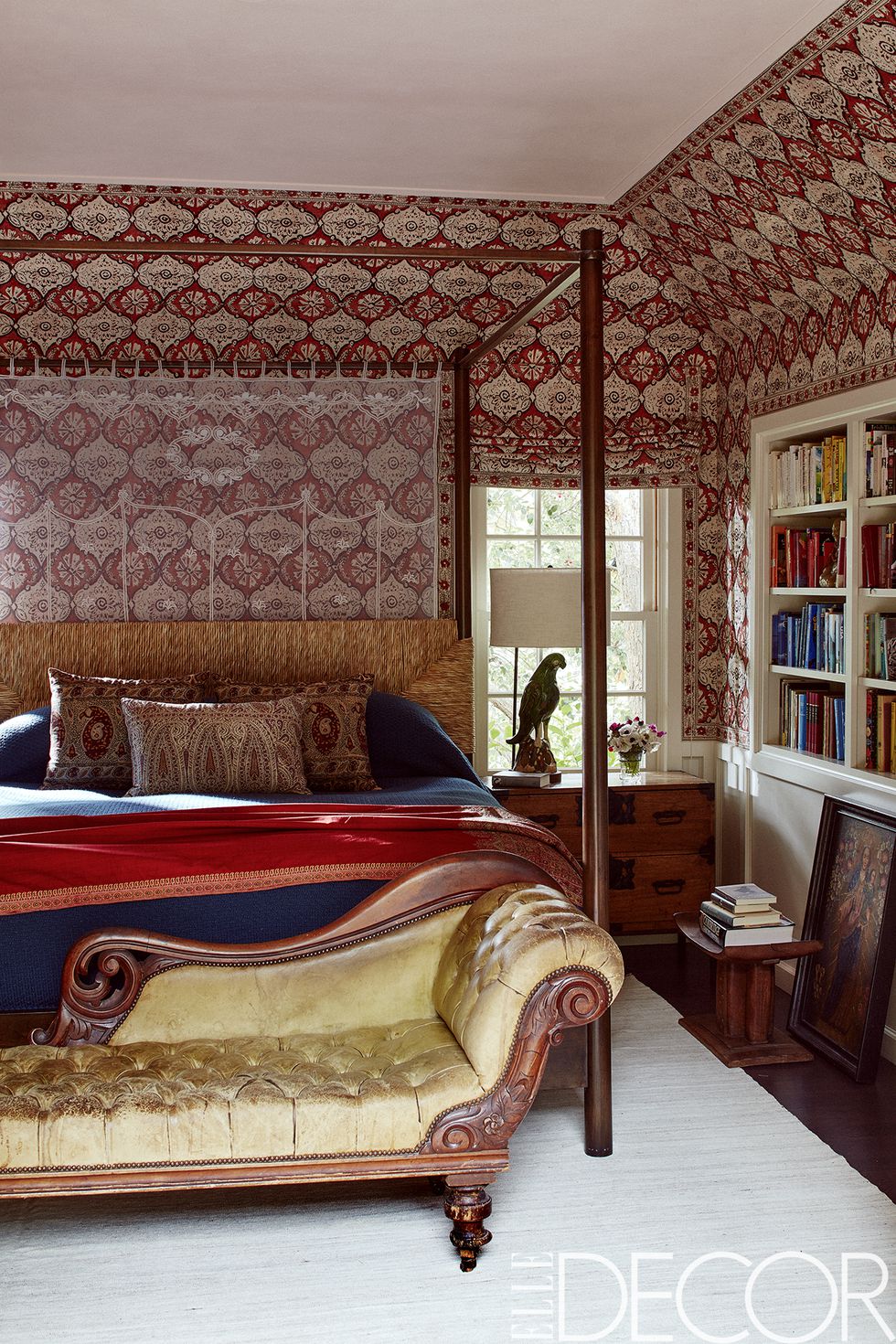 In the master bedroom, the bed by Hollywood at Home is dressed in Deborah Sharpe Linens, the antique George IV settee retains its original leather and the wall covering and shade are of Minnie Maharani by Peter Dunham Textiles. 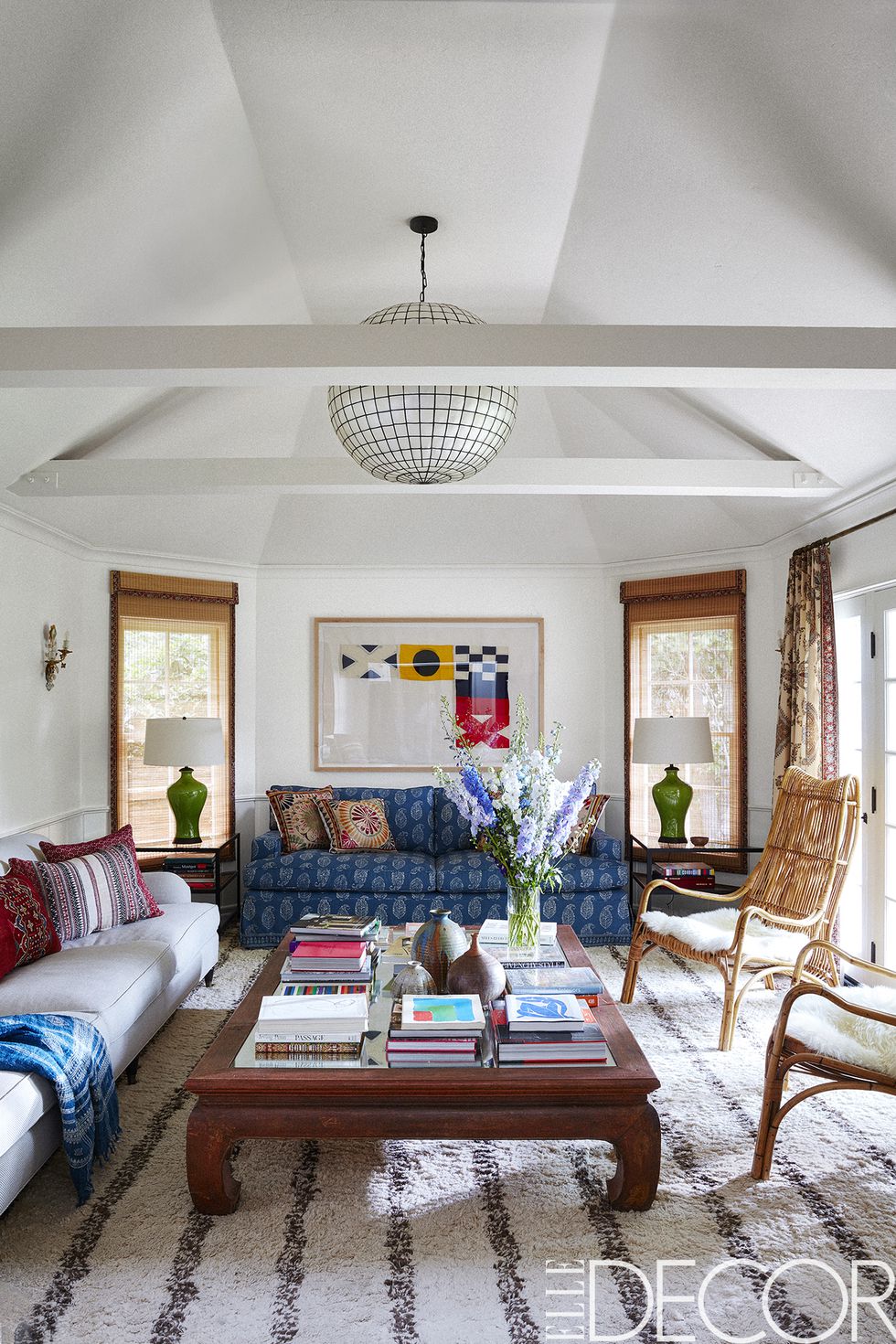 In the family room, the actress’s own artwork hangs over a sofa re-covered in a paisley by Peter Dunham Textiles, a custom sofa is upholstered in a Schumacherperformance fabric, the armchairs are from the ’70s and the cocktail table base is from an antique Chinese opium bed. The custom rug is from Dunham’s shop,Hollywood at Home, the pendant light is vintage and the walls are in Benjamin Moore’s Decorator’s White.

Dunham has since introduced the fabric as part of his linen collection, dubbing it Minnie Maharani. Throughout the house, vintage pieces are mixed with furnishings from Dunham’s Hollywood at Home line and a few items from Driver’s past — often spruced up with Dunham’s fabrics. A love seat between the living room’s two bookshelves was covered with a Berber rug that she had custom made over two months when she was filming The Red Tent in Morocco.

A sofa that she spent a summer building with a furniture-maker friend was recut to fit the more casual family room and reupholstered in a faded cream paisley on a blue ground.

Driver was inclined to get rid of a set of old dining room chairs, the legs of which her late dogs had chewed when they were puppies. Dunham encouraged her to rehabilitate them: “It will remind you of your beloved dogs.” Driver suggested that they re-cover the seats with mismatched Islamic and African fabrics. “As opposed to a lot of my other clients, Minnie loves the participatory part,”says Dunham. “I would bring her options, and she would twist them around. She has an instinct for it.” 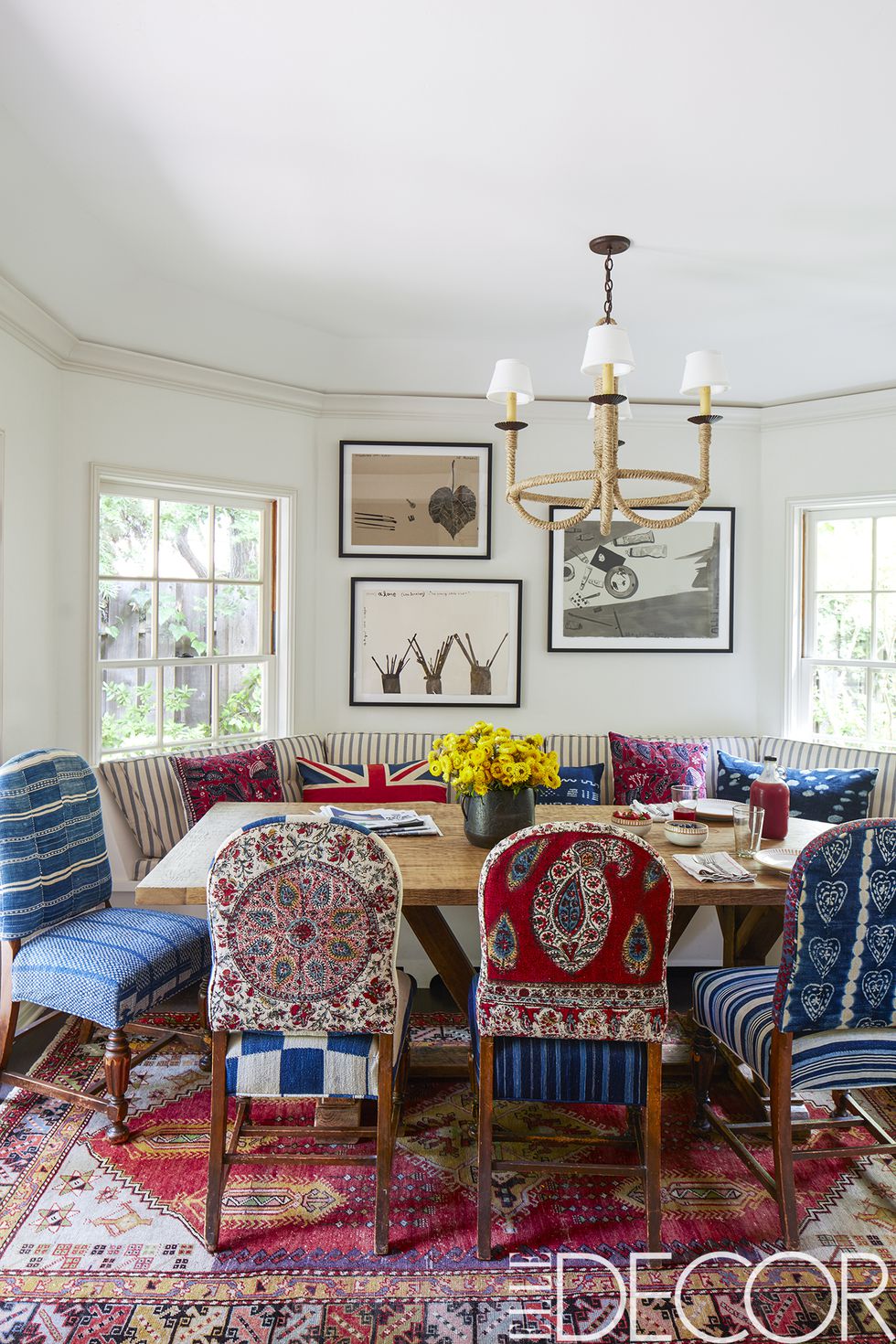 The chairs in the dining area came from Driver’s former house and were re-covered in vintage Islamic and African textiles, the banquette is covered in a Pindler stripe, the chandelier is by Hollywood at Home, the vintage rug is fromJamal’s Rug Collection and the watercolors are by Konstantin Kakanias.

For all of its exotic touches, the house is “multipurpose,” says Driver. “It has to be, because I have an eight-year-old son, which means there are often kids running around. The playroom is in the garage, and they’re not allowed in my lovely grown-up living room with sticky fingers.” Wakefield is often joined by his two teenage sons. 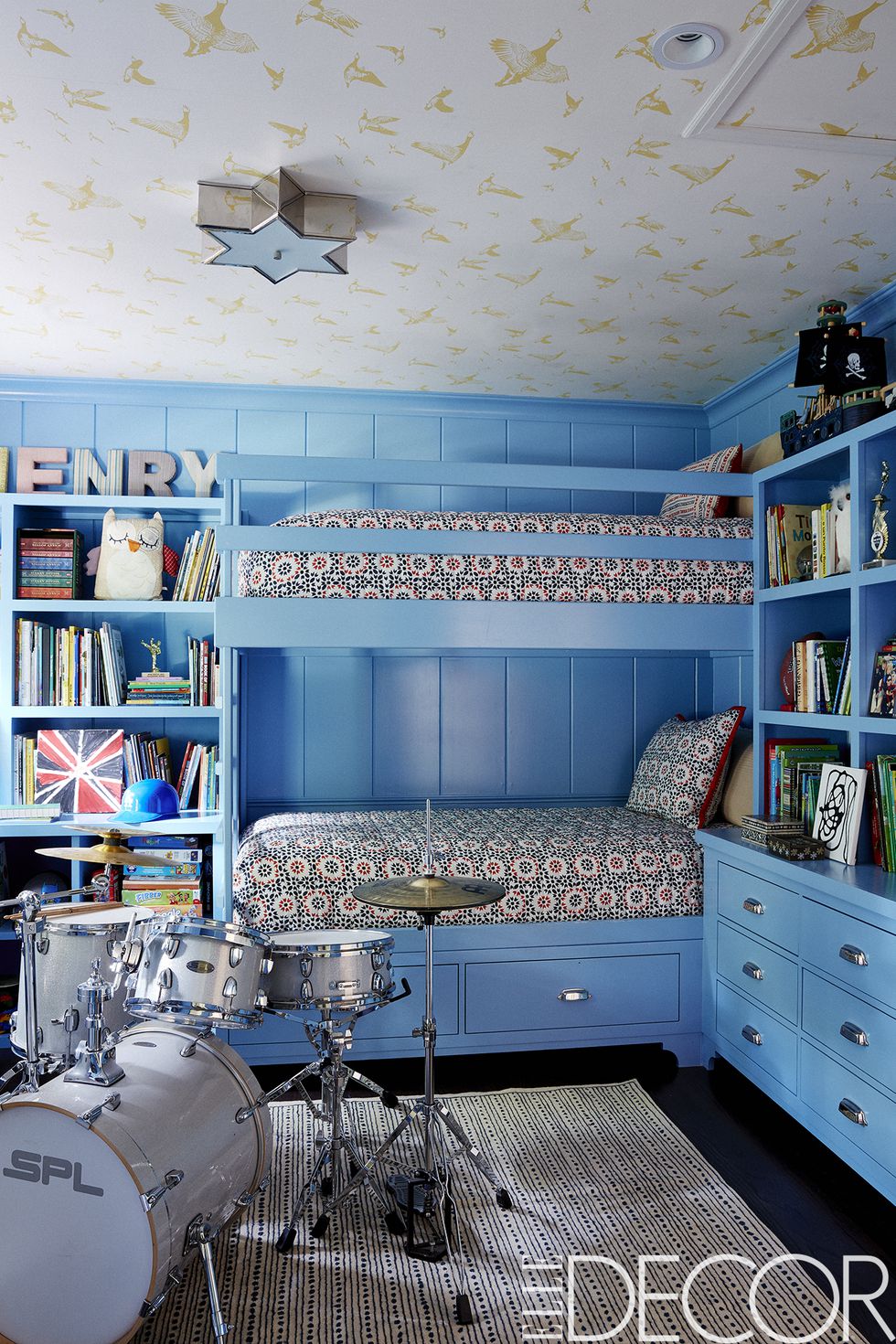 In Driver’s son’s bedroom, the bunk beds and cabinetry are painted in Benjamin Moore’s Poolside and the bedding is from Driver’s home collection for HSN.

“The house gets full,” she says, “but there are lots of places to get away from everybody. It’s nice to have communal areas, and it’s also nice to have places to disappear to. 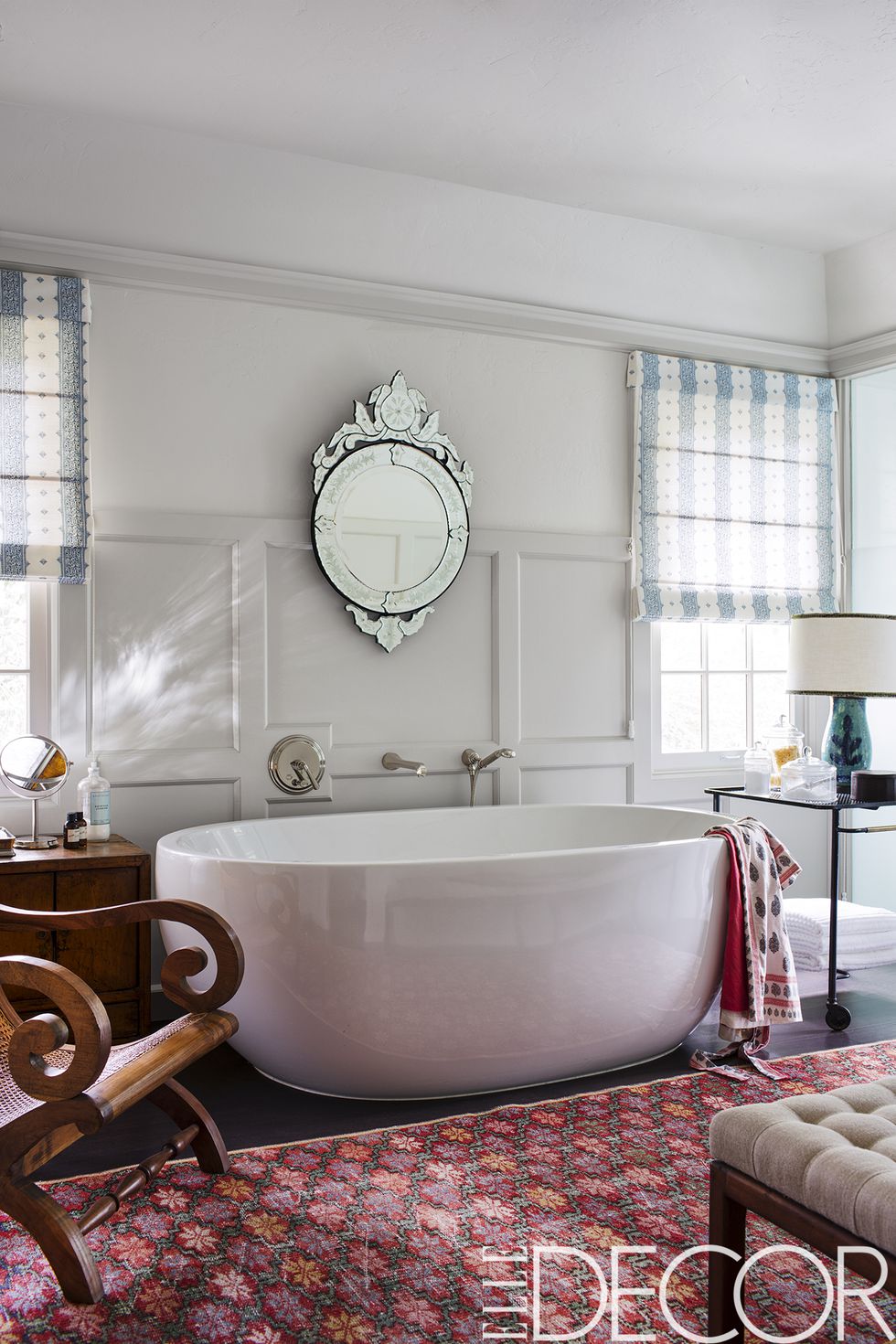 The master bath features a Venetian mirror, a 1950s bar cart by Mathieu Matégot, and a vintage rug, the flooring is oak and the walls are painted inBenjamin Moore’s Navajo White.